Global equity markets have rallied since their mid-February lows and have largely reclaimed the steep declines incurred in the first five weeks of the year. Amid a welcome calm in financial markets, some risks have receded into the background but they have not disappeared. The key issues for me remain mediocre global economic growth, dovish comments from US Federal Reserve (Fed) chair Janet Yellen, which have pushed out expectations – and created uncertainty – as to when US interest rates will next rise, and a lack of conviction in the market cycle.

Share price valuations of some defensive assets and sectors (and individual stocks) look expensive, in my view, as investors search for both safety and income. The persistence of momentum trading has ensured that stocks and sectors which have done well tend to continue to do well – for now. Any slippage in the news around these stocks, though, see the recent example of Netflix (share price fell after subscriber numbers failed to hit estimates - indicating a slowdown in growth) a presents a warning flag, in my view, as to the ‘overowned’ nature of consumer and tech stocks currently.

Yellen will require proof that the slowdown in US activity (including private consumption) is transitory and that inflation is firming before sharply changing the balance of risks. The June FOMC meeting is just one week before the EU referendum in the UK, which Fed officials have acknowledged as ‘a big event’. In the UK, March retail sales were below consensus, adding to evidence that the economy is being affected by referendum uncertainty. Surveys across the board also point to a slowdown in investment in the UK, and Bank of England Governor Mark Carney said recently that there was “growing uncertainty about the UK’s macroeconomic outlook related to the referendum”.

There is also uncertainty surrounding the short and long-term impact of Brexit on UK stocks. The FTSE 100 index is generally deemed to be better insulated from a Brexit than the FTSE 250 index. That’s because many FTSE 100 stocks have multinational exposure – energy companies, pharmaceutical giants and tobacco companies, which make a lot of money outside the UK and EU. They’ll also benefit from a likely further fall in the value of the pound once they translate their overseas earnings back into sterling. Stocks in the FTSE 250 are considered to be more exposed to any fallout from a Brexit. That’s because far more of them make most of their revenue and earnings in the UK or the EU. As such, currently the FTSE 250 now trades at a valuation discount to the FTSE 100 for the first time since 2009.

I have made no changes to my outlook but remain positive on equities as we await a pick up in global economic growth. 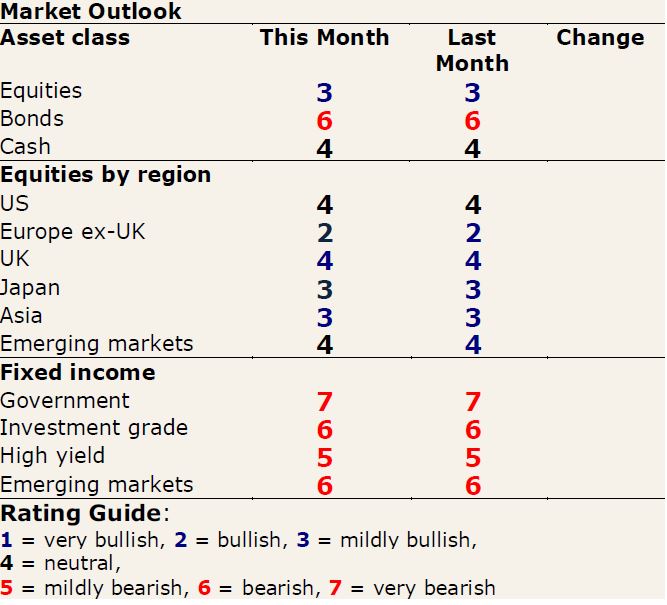