At the start of the year, the MSCI Asia ex-Japan index lost as much as 12.9%1 before rebounding to recoup those losses by the end of the first quarter. What drove markets lower were global investors’ fears about three issues: 1) the slowdown in China, 2) the potential repercussions of further US policy tightening and 3) rising deflationary pressures driven by weak commodity prices. As it appears investors have overcome these fears, the key question likely now on investors’ minds is whether recent signs of an upturn in Asia are sustainable.

We would like to point out a number of fundamental drivers falling into place, from government policy to corporate or structural reform, that are essential to supporting growth in the region over the long term.

Arguably the biggest concern weighing on Asian equity markets at the start of the year, given the fragile state of the global economy, was the impact US interestrate normalization would have on Asian economies. In particular, there were worries that a US Federal Reserve (Fed) rate hike could result in another “taper tantrum”2 as we saw in the second half of 2013. This concern died down as the Fed turned more cautious in January, leading to Fed rate hike expectations being toned down from four times this year to maybe only one, at the end of the year. With less Fed tightening on the horizon, Asian currencies quickly appreciated. Some Asian central banks took advantage of the Fed’s softer stance and resultant diminished currency risk. Already, since the start of the year, Indonesia’s central bank has reduced rates three times, and Taiwan and India have done the same once each. This follows 16 rate cuts in 2015 alone from Asia ex-Japan central banks. History has shown that whenever liquidity expectations turn positive, as we saw toward the end of the first quarter, emerging markets, especially Asia, tend to outperform as investors are willing to take on more risk. However, with global growth expected to remain below par given the structural weights of excess capacity and leverage, it remains imperative that reform and restructuring continue to be pursued in Asia. 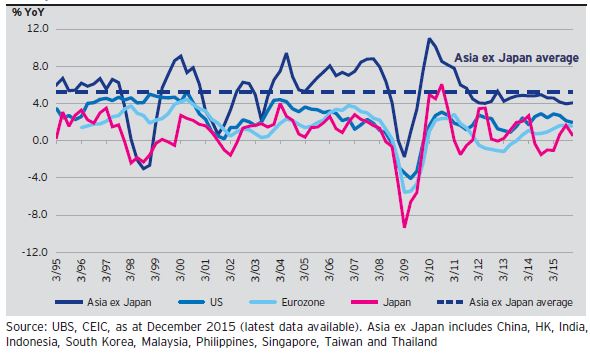 2 On May 22, 2013, the Fed ended one of its quantitative easing (QE) programs, triggering panics in bond markets and other risk assets, such as emerging markets.