Economic Insights: Why negative interest rates are not a solution for Japan or the eurozone

The Bank of Japan (BoJ) has now been conducting quantitative easing (QE) for just over three years, while the European Central Bank (ECB) has been conducting QE for just over one year. In neither case can the results be said to be satisfactory. In this article I explain why these two central banks have achieved far less success than either the US Federal Reserve (Fed) or the Bank of England (BoE). I also spell out why the negative interest rate policies pursued by the BoJ and the ECB are not a solution to the problems of the Japanese and eurozone economies. 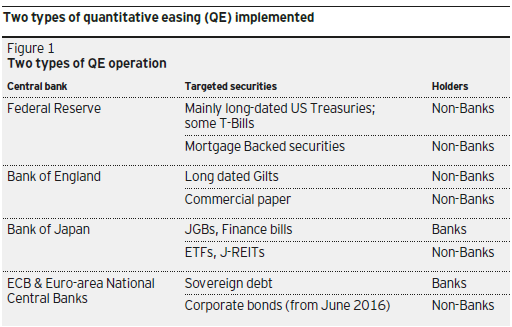 Among the major developed economies (US, UK, the eurozone and Japan) two different types of QE have been conducted in recent years.

The QE operations conducted by the Fed and the BoE have largely been successful because (1) they were targeted at the purchase of securities from non-banks, (2) they therefore increased the stock of money or purchasing power held by firms and households directly, and (3) were consistent with a reduction in private sector leverage.

By contrast, the QE operations conducted by the BoJ and the ECB have had much less success because (1) they were targeted largely at the purchase of securities from banks, and as a result, (2) they did not increase the stock of money or purchasing power held by firms and households, and (3) were not consistent with any reduction in private sector leverage.

To restore economic growth and raise inflation closer to the target area of 2% in both Japan and the Euro-area, policymakers need to achieve two sets of results. First they need to encourage and ensure the repair of private sector balance sheets since spending will not resume normal or potential growth rates unless excess leverage is eliminated. Second, the economies need to be re-liquefied, or provided with additional purchasing power but without adding to leverage.